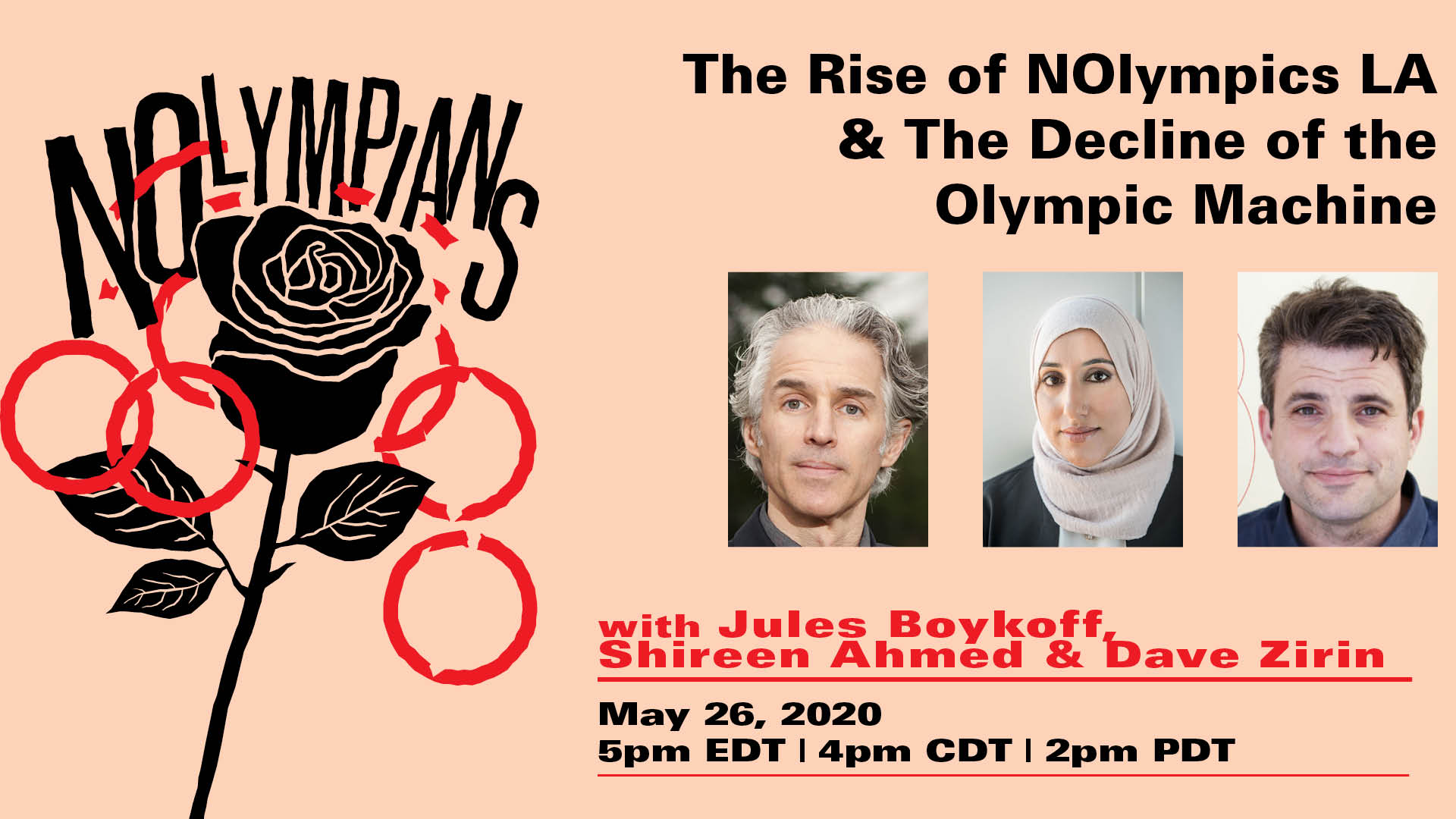 As part of #RadicalMay, Jules Boykoff, Shireen Ahmed, and Dave Zirin discuss the rise of anti-Olympics organizing and protests, the decline of the Olympic machine, and the future or organized

As part of #RadicalMay, Jules Boykoff, Shireen Ahmed, and Dave Zirin discuss the rise of anti-Olympics organizing and protests, the decline of the Olympic machine, and the future or organized sports in the era of Covid-19.

Register for this event through Eventbrite. Attendees will receive a link to the talk on YouTube upon registering.

Jules Boykoff is a professor of political science at Pacific University in Oregon, and is the author the newly released NOlympians: Inside the Fight Against Capitalist Mega-Sports in Los Angeles, Tokyo and Beyond of Power Games: A Political History of the Olympics; Activism and the Olympics: Dissent at the Games in Vancouver and London; Celebration Capitalism and the Olympic Games; and Beyond Bullets: The Suppression of Dissent in the United States. His writing has appeared in New Left Review, the Guardian, the New York Times, The Nation, Al Jazeera, the Los Angeles Times, Jacobin, and elsewhere.

Shireen Ahmed is a writer, public speaker and award-winning sports activist who focuses on Muslim women, and the intersections of racism and misogyny in sports. Her work has been featured and discussed in various media outlets. Her expertise is sought by major television and radio networks. She is part of the “Burn It All Down” feminist sports podcast team. The first feminist sports podcast that analyzes sports culture from an intersectional feminist lens.

Named one of UTNE Reader’s “50 Visionaries Who Are Changing Our World”, Dave Zirin writes about the politics of sports for the Nation Magazine. He is their first sports writer in 150 years of existence. Winner of Sport in Society and Northeastern University School of Journalism’s ‘Excellence in Sports Journalism’ Award, Zirin is also the host of Sirius XM Radio’s popular weekly show, Edge of Sports Radio. He has been called “the best sportswriter in the United States,” by Robert Lipsyte. Dave Zirin is, in addition, a columnist for SLAM Magazine and the Progressive.

Fernwood PublishingIn an era when the restructuring of capitalism seems to be threatening to erase many of the gains that have been made by the oppressed in society, we think that our books have a part to play in bucking the trend. – Errol Sharpe, Fernwood Publishing