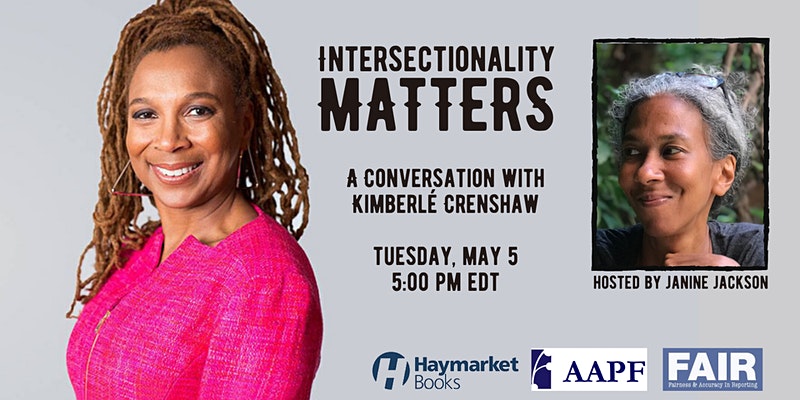 The past few months have prompted unprecedented levels of turmoil and unpredictability due to rising alarm over COVID-19 (SARS-CoV-2). Coronavirus did not create the stark social, financial, and political inequalities that

The past few months have prompted unprecedented levels of turmoil and unpredictability due to rising alarm over COVID-19 (SARS-CoV-2).

Coronavirus did not create the stark social, financial, and political inequalities that define life for so many of us, but it has made them more strikingly visible than at any moment in recent history.

Meanwhile, the most vulnerable to societal neglect remain most impacted. Unfortunately, some of the intersectional dimensions of these structural disparities remain undetected and unreported.

Join us for a conversation with Kimberlé Crenshaw, hosted by Janine Jackson, about why intersectionality matters in this moment of crisis.

Kimberlé Crenshaw, Professor of Law at UCLA and Columbia Law School, is a leading authority in the area of Civil Rights, Black feminist legal theory, and race, racism and the law. Her work has been foundational in two fields of study that have come to be known by terms that she coined: Critical Race Theory and Intersectionality.

She is the host of the African American Policy Forum’s Under The Blacklight: The Intersectional Failures that COVID Lays Bare, an ongoing livestream series in which thought leaders around the country discuss the current crisis, explore how we can move forward together to protect and uplift the most vulnerable among us, and imagine the world we hope to see emerge on the other side.

Crenshaw is also the host of Intersectionality Matters.

Janine Jackson is the program directors at Fairness & Accuracy In Reporting (FAIR) and producer/host of FAIR’s syndicated weekly radio show CounterSpin. She contributes frequently to FAIR’s newsletter Extra!, and co-edited The FAIR Reader: An Extra! Review of Press and Politics in the ’90s (Westview Press). She has appeared on ABC‘s Nightline and CNN Headline News, among other outlets, and has testified to the Senate Communications Subcommittee on budget reauthorization for the Corporation for Public Broadcasting. Her articles have appeared in various publications, including In These Times and the UAW’s Solidarity, and in books including Civil Rights Since 1787 (New York University Press) and Stop the Next War Now: Effective Responses to Violence and Terrorism (New World Library).

Fairness & Accuracy In Reporting (FAIR), the national media watch group, has been offering well-documented criticism of media bias and censorship since 1986.

Haymarket BooksHaymarket Books is a radical, independent, nonprofit book publisher based in Chicago, a project of the Center for Economic Research and Social Change.