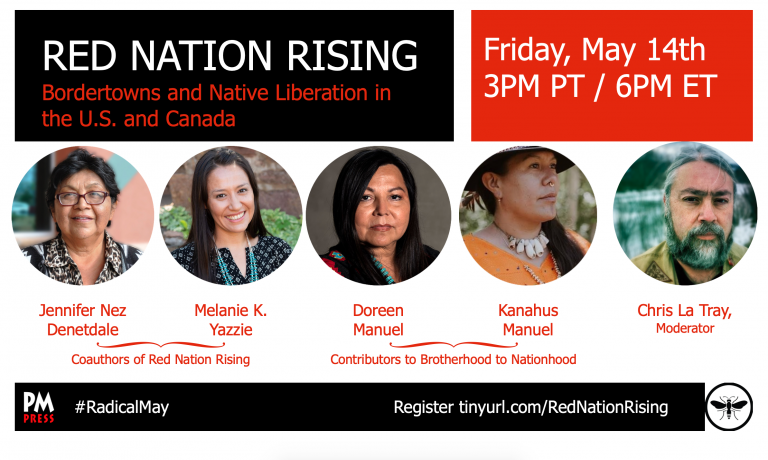 Red Nation Rising: Bordertowns and Native Liberation in the U.S. and Canada

Bordertowns are white-dominated towns and cities that operate according to the same political and spatial logics as all other American towns and cities. The difference is that these settlements get their name from their location at the borders of current-day reservation boundaries, which separate the territory of sovereign Native nations from lands claimed by colonial powers such as the United States and Canada.

Join us for a discussion about bordertowns and Native Liberation more broadly, coinciding with the launch of new book Red Nation Rising: From Bordertown Violence to Native Liberation (PM Press). Speakers are from both sides of the colonial U.S.-Canada border: south of the border, Jennifer Nez Denetdale and Melanie K. Yazzie, co-authors of Red Nation Rising; and north of the border, Doreen Manuel and Kanahus Manuel, co-author and contributor to Brotherhood to Nationhood: George Manuel and the Making of the Modern Indian Movement (Between the Lines).

Auto-generated closed-captioning will be provided. The event is free, and if you are able, we are accepting donations at the registration page to cover costs.
Hosted by PM Press and Between the Lines. Part of the #RadicalMay event series.

Bordertowns came into existence when the colonial militaries and trading posts were strategically placed along expanding imperial frontiers to extinguish Indigenous resistance and incorporate indigenous territories into the burgeoning nation-states. This continues today. But little has been written about bordertowns specifically. Red Nation Rising marks the first effort to tell these entangled histories and inspire a new generation of Native freedom fighters to return to bordertowns as key front lines in the long struggle for Native liberation from colonial control. For example, speaker Kanahus Manuel has been living on contested lands in Secwepemc territory, resisting the establishment of man camps, which serve as a base for oil pipeline construction.

After talks from the speakers and a discussion moderated by Chris La Tray, there will be an opportunity for questions from the audience.

Jennifer Nez Denetdale (Diné) is a professor of American Studies at the University of New Mexico who teaches courses in critical indigenous studies, indigenous gender and sexuality, and Navajo studies. She is a strong advocate for Native peoples and serves as chair of the Navajo Nation Human Rights Commission. She is the author of Reclaiming Diné History: The Legacies of Navajo Chief Manuelito and Juanita and coauthor of Red Nation Rising: From Bordertown Violence to Native Liberation (PM Press, 2021).

Melanie K. Yazzie (Diné) is an assistant professor in the Departments of Native American Studies and American Studies at the University of New Mexico. She organizes with the Red Nation, an indigenous-led leftist organization committed to indigenous liberation. She is lead editor of Decolonization: Indigeneity, Education & Society, an international journal committed to public intellectualism and social justice, and coauthor of Red Nation Rising: From Bordertown Violence to Native Liberation (PM Press, 2021).

Doreen Manuel (Secwepemc/Ktunaxa) comes from a long line of Indigenous oral historians and factual storytellers. She is an award-winning filmmaker and educator, the principal owner of Running Wolf Productions, and the director of the Bosa Centre for Film and Animation at Capilano University. She is a co-author of Brotherhood to Nationhood: George Manuel and the Making of the Modern Indian Movement (Between the Lines).

Kanahus Manuel (Secwepemc/Ktunaxa) is a member of the Secwepemc Women Warrior Society, and a leader with the Tiny House Warriors, a grassroots group of Indigenous Secwepemc Land Defenders resisting the Trans Mountain Expansion pipeline in British Columbia. She is a mother and traditional Birth Keeper.

Chris La Tray is a Métis writer and storyteller. His first book, One-Sentence Journal: Short Poems and Essays From the World At Large (2018, Riverfeet Press) won the 2018 Montana Book Award and a 2019 High Plains Book Award. His next book, Becoming Little Shell, will be published by Milkweed Editions in 2022. Chris is an enrolled member of the Little Shell Tribe of Chippewa Indians and lives near Missoula, Montana.

The event recording will be available afterwards on Between the Lines’ YouTube, and a transcript will be made available.” 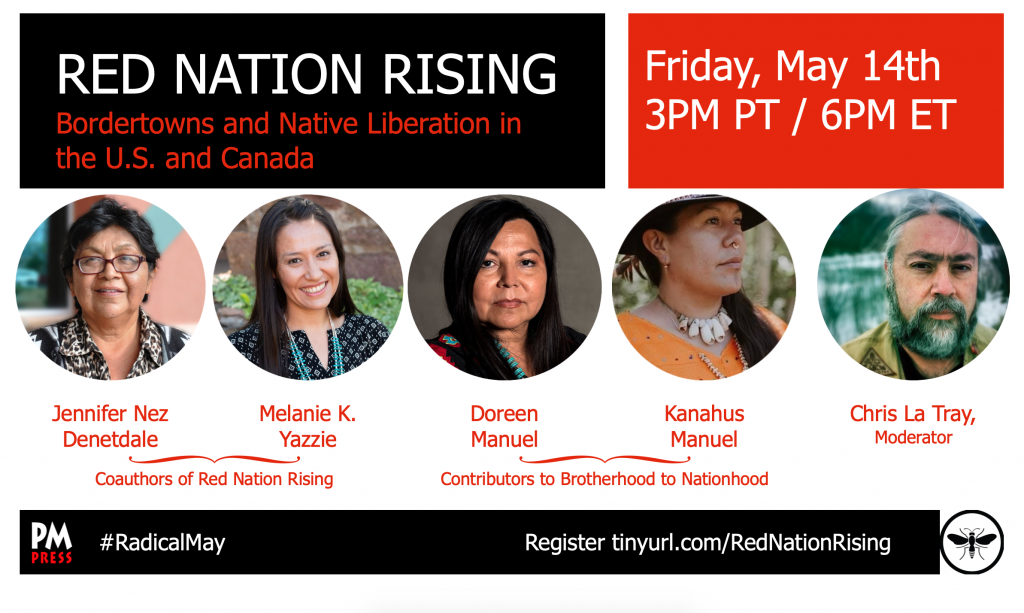