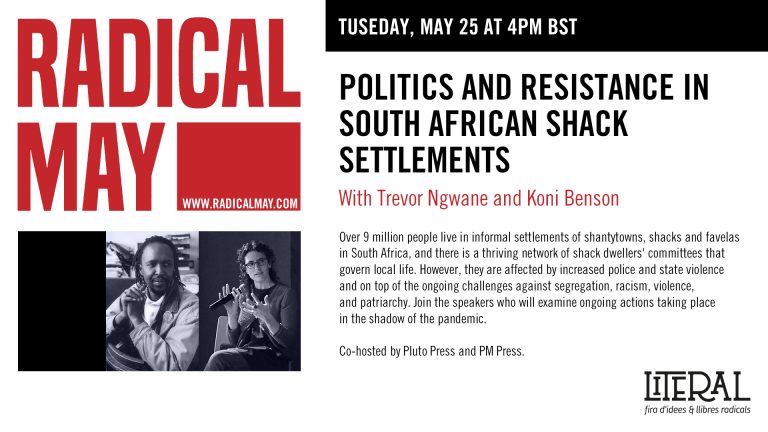 According to recent studies, over 9 million people live in informal settlements of shantytowns, shacks and favelas in South Africa and there is a thriving network of shack dwellers’ committees that govern local life, that are responsive to popular needs and provide a voice for the community.

However, this comes against increased police and state violence and on top of the ongoing challenges against segregation, racism, violence, and patriarchy standing between the legacy of the colonial and apartheid past and a future of freedom still being fought for.
The speakers will be examining ongoing actions taking place in the shadow of the pandemic and ask what are the lessons of organised struggle from previous victories that can we draw from during these evermore precarious times.

The event is co-hosted by Pluto Press and PM Press as part of Radical May.

Trevor Ngwane is a scholar activist who spent twenty years as a full-time organiser in South African trade unions, community organisations and social movements before and after the defeat of apartheid. He later obtained his PhD in Sociology at the University of Johannesburg where he now teaches and conducts research. He is the author of ‘Amakomiti: Grassroots Democracy in South African Shack Settlements’ (Pluto Press, 2021).

Koni Benson is a historian, organizer, and educator. She is a lecturer in the Department of History at the University of the Western Cape in Cape Town, South Africa, where she is committed to creative approaches to history that link art, activism, and African history in her work with various student, activist, and cultural collectives in southern Africa. Koni is the co-author of ‘Crossroads: I Live Where I Like: A Graphic History’ (PM Press, 2021).

Register through Eventbrite to receive a link to the stream before the event. It will start at 16:00 BST. You can also find the event on Pluto Press’ YouTube channel. The event will be recorded and uploaded to the channel after the event too.

‘Amakomiti: Grassroots Democracy in South African Shack Settlements’ is available worldwide from Pluto Press. Attendees of this event can get 30% off the paperback and ebook by using the coupon code RADICALMAY at the checkout.”