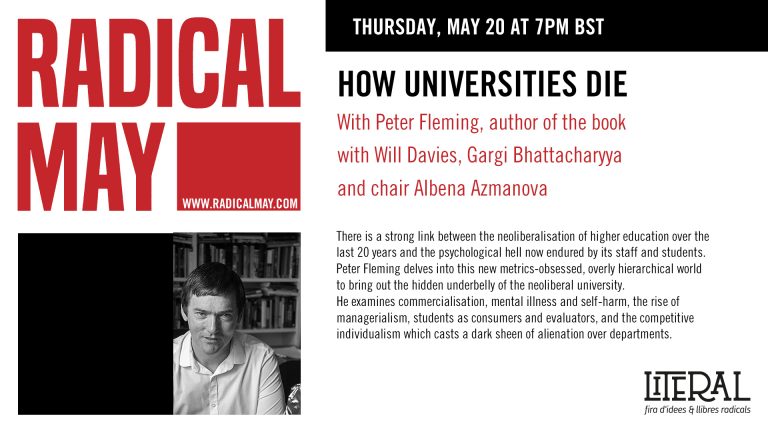 Join Peter Fleming, Will Davies, Gargi Bhattacharyya and chair Albena Azmanova for a launch event to mark the release of Peter’s book Dark Academia: How Universities Die, published by Pluto Press as part of Radical May

“A brilliant exposé of the scourge of neoliberalism and its dark transformation of higher education into an adjunct of sordid market forces. This is a book that should be read by anyone concerned with not only higher education but the fate of critically engaged agents, collective resistance and democracy itself’

Join Peter Fleming, Will Davies, Gargi Bhattacharyya and chair Albena Azmanova for a launch event to mark the release of Peter’s book ‘Dark Academia: How Universities Die’, published by Pluto Press as part of Radical May.

There is a strong link between the neoliberalisation of higher education over the last 20 years and the psychological hell now endured by its staff and students. While academia was once thought of as the best job in the world – one that fosters autonomy, craft, intrinsic job satisfaction and vocational zeal – you would be hard-pressed to find a lecturer who believes that now.

Peter Fleming delves into this new metrics-obsessed, overly hierarchical world to bring out the hidden underbelly of the neoliberal university. He examines commercialisation, mental illness and self-harm, the rise of managerialism, students as consumers and evaluators, and the competitive individualism which casts a dark sheen of alienation over departments.

Arguing that time has almost run out to reverse this decline, this book shows how academics and students need to act now if they are to begin to fix this broken system.

Peter Fleming is Professor of Organisation Studies at the University of Technology, Sydney. He is the author of ‘The Mythology of Work’ (Pluto, 2015) and ‘The Death of Homo Economicus’ (Pluto, 2017).

Gargi Bhattacharyya is one of the UK’s leading scholars on race and capitalism. She is the author of ‘Rethinking Racial Capitalism’ (Rowman & Littlefield, 2018), ‘Dangerous Brown Men’ (Zed, 2008), ‘Traffick’ (Pluto Press, 2005) and co-author of ‘Empire’s Endgame’ (Pluto Press, 2020).

Chair Albena Azmanova is a scholar, author and political commentator. She is currently Associate Professor in Political and Social Thought at the University of Kent’s Brussels School of International Studies and is the author of ‘Capitalism on Edge’ (Columbia University Press, 2020).

Radical May brings together authors and publishers from over 15 countries for an inspiring and multilingual programme of round tables, talks and debates with some of the world’s leading radical thinkers. View the full programme for 2021 here.

Register through Eventbrite to receive a link to the stream before the event. It will start at 19:00 BST. You can also find the event on Pluto Press’ YouTube channel. The event will be recorded and uploaded to the channel after the event too.

Dark Academia is available to order from our website. Attendees of this event can get 30% off the paperback using the coupon code DARKACADEMIA at the checkout.”