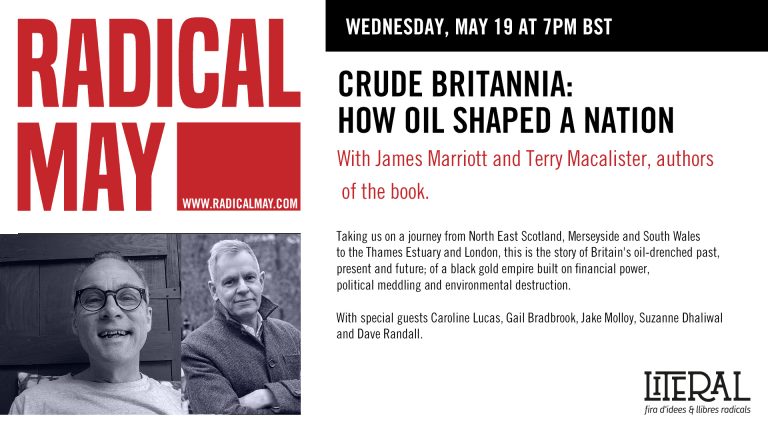 “This book superbly illustrates how the UK’s toxic relationship with oil has defined our politics, our lives and our culture. An engrossing read’ – Jon King, Gang of Four

Taking the reader on a journey from North East Scotland, Merseyside and South Wales to the Thames Estuary and London, this is the story of Britain’s oil-drenched past, present and future; of a black gold empire built on financial power, political meddling and environmental destruction.

For decades, BP and Shell extracted the minerals, finance and skills of the UK. Working behind the scenes, Big Oil profoundly influenced the country’s culture. Then, at the start of the 21st century, the tide seemed to go out – Britain’s refineries were quietly closed; the North Sea oilfields declined. Now, while the country goes through the seismic upheavals of Brexit and the climate emergency, many believe the age of oil to be over. But is it?

The authors speak to oil company executives and traders, as well as refinery workers, filmmakers and musicians, activists and politicians, putting real people at the heart of a compelling story.

The panel on power, politics and climate will feature:

Terry Macalister is the former Energy Editor of the Guardian.

Register through Eventbrite to receive a link to the stream before the event. It will start at 19:00 GMT. You can also find the event on Pluto Press’ YouTube channel. The event will be recorded and uploaded to the channel after the event too.

Signed book plates are available for attendees based in the UK, just choose the relevant ticket type. Once your signed book plate ticket has been purchased, please email kierano@plutobooks.com with your address and we will post a hardback copy of ‘Crude Britannia’ along with the book plate. These will be posted after the event and may take a couple of weeks to arrive.

Crude Britannia is available to order from the Pluto Press website. Attendees of this event can get 30% off the hardback and ebook editions, using the coupon code CRUDE30 at the checkout.”